Adelphi president to speak at Rotary 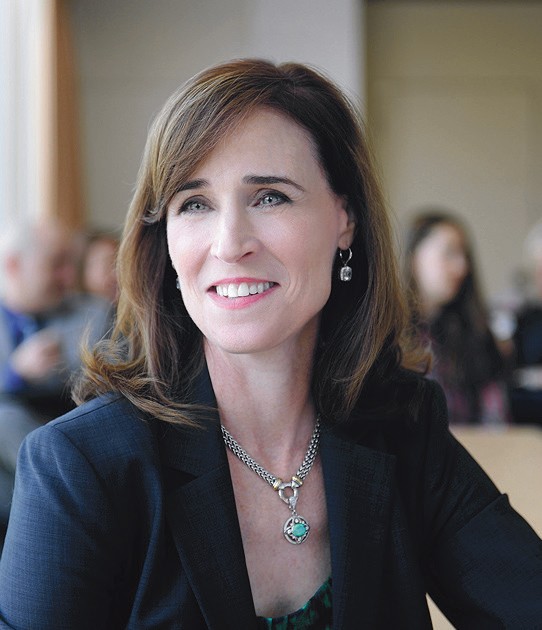 Adelphi University President Christine Riordan, Ph.D., will speak to members of the Mineola-Garden City Rotary Club at its luncheon meeting on Monday, November 13, 12:15 – 1:30 p.m., at the Garden City Hotel.

Rotarians look forward to welcoming Dr. Riordan and learning about the growth of Adelphi, its new and innovative programs, as well as its impact on the Garden City community.

Dr. Riordan is an internationally recognized expert in leadership development, team building, and diversity and inclusion. She is recognized for her groundbreaking initiatives to personalize and transform the higher education experience.

Since beginning her appointment as Adelphi University’s 10th president in 2015, she has launched a remarkable turnaround strategy that has led to a boost in enrollment, increased fundraising, greater recognition and new strategies to promote student success, diversity and inclusion.

In the Fall 2016, Adelphi enrolled the largest first-year class in its history. Adelphi has advanced in its U.S. News & World Report rankings, has been cited for excellence by U.S.A. Today , Forbes and Washington Monthly, and has been named to the President’s Higher Education Community Service Honor Roll. And, Alumni giving is at an alltime high.

Dr. Riordan has published more than 60 academic and business press articles, is authoring a book on leadership, and is frequent speaker on leadership and overcoming challenges, including her TEDx talk, ”Dare to Be Extraordinary.” Dr. Riordan consults regularly with corporations on leadership-development activities, diversity management and team performance. She has been interviewed and written articles for media such as The Financial Times, Harvard Business Review, Forbes USA Today, U.S. News & World Report, The New York Times, International Herald Tribune, The Huffington Post, MSNBC, CNN, CNBC, The Wall Street Journal Marketwatch, CareBuilder and Psychology Today. These articles are profiled at christineriordann.com Her work has been cited more than 4,300 times by other authors.

In 2016, Dr. Reardon made the Long Island Press Power list of the 50 most influential people on Long Island, and Long Island Business News included her in its listings of Who’s Who in Education, Who’s Who in Professional Women and Top CEOs. She also received the Bethpage Best of Long Island Awards Best College President. Dr. Reardon is the recipient of the Advancement for Commerce, Industry and Technology (ACIT), Monsignor Hartman Humanitarian Award for Commitment to Leadership in the Field of Education, and was named one of the 2017 New York State Senate Women of Distinction. Dr. Riordan is the recipient of numerous other awards and recognitions.

To attend the Rotary luncheon meeting at $15 person, with menu choice, and for information about becoming a member of the Mineola-Garden City Rotary Club, please call Alba Spinelli, Club President at 516-307-8870.

You have 10 free articles remaining!
Near me
40 miles